Today we will crochet a white and quite different bunny amigurumi pattern. The bunny looks a little different. Also, her dress is so cute. You can see all the details of the pattern step by step. His ears look rather short. I agree with you on this. But Olda is a cute bunny. It doesn’t have a special name. You can put a name after you crochet the amigurumi. I continue to share crochet amigurumi patterns for free. The eyes and nose of the bunny amigurumi look pretty cute. You should also take some care when crocheting your feet. Now let’s crochet step by step.

LIST OF MATERIALS REQUIRED:
1. Yarn of a suitable color (white) I used YarnArt Jeans yarn, crochet hook # 2.5. Red yarn (for shorts). I used Semenovskaya “Souffle”, hook number 4. Some black yarn (for eyebrows and mouth). Some gray yarn (for the heels).
2. Hook of a suitable size (I have # 2.5 and # 4).
3. A piece of a wide red ribbon (for a bow). And a small piece of a red thin ribbon (around the neck).
4. Filler
5. Black half-beads (8 mm), small plastic spout (you can embroider)
Auxiliary tools: scissors, needle, yarn, eye glue.

Abbreviations
AR – Amigurumi Magic ring
LL: Lifting loop Click for mean!
MR – Amigurumi Magic ring
App – application
sc : Single Crochet
inc : Increase
dec : Decrease
tr : Triple Crochet/ Treble Crochet
st: Stitch
dc : Double Crochet
hdc: Half Double Crochet
sl-st : Slip Stitch
ch : Chain
..in : make increase into same stitch as many as the number which is given in front of “inc” abbreviation (exp; 3inc, 4inc..).
FLO : Crochet into front loops only
BLO : Crochet into back loops only
BL : Bobble Stitch – do 5dc all in the same stitch and then yarn over and pull through all the loops on your hook (the original loop + 1 loop for each partially completed dc)

We crochet panties
We will crochet with red yarn. I will not give a detailed description of the pants, since they need to be adjusted to fit your bunny (depends on the crochetting density, on the hook number and on the thickness of the yarn used).
I used hook # 4, Souffle yarn.
1 Rnd: Dial a chain of 30 ch + 7 button loops
2 Rnd: 30 sc, ch lifting, turning (while we crochet in rotary rows)
3 Rnd: 30 sc, ch, turning
4 Rnd: 30 sc, ch, turning
5 Rnd: inc, 28 sc, inc (32), turning
6 Rnd: 32 sc, here we close the shorts and then we will crochet in a circle (you need to try on according to your bunny, I crochetted according to my bunny))
7 Rnd: We make 2 increments in a row (34)
8 Rnd: 10 sc, inc, 10, inc, 8 sc, here I typed a chain of 8 ch, skipped 7 loops and continued to crochet in the eighth loop (this is the hole for the ponytail).
9 Rnd: further we will crochet in a circle to the desired length, along a chain of ch
we crochet sc (under the chain). You can make 2-3 increments in rows, to the desired width. Try on a bunny. Having reached the required length of the panties, fold them in half and tie 4 sc in the middle (or sew with a needle). I tied on the seamy side sc) Turn it out again on the front side, sew on the button. We glue the eyes, embroider the eyebrows, mouth, nose.
We cling a red bow around the neck. Our bunny is ready! 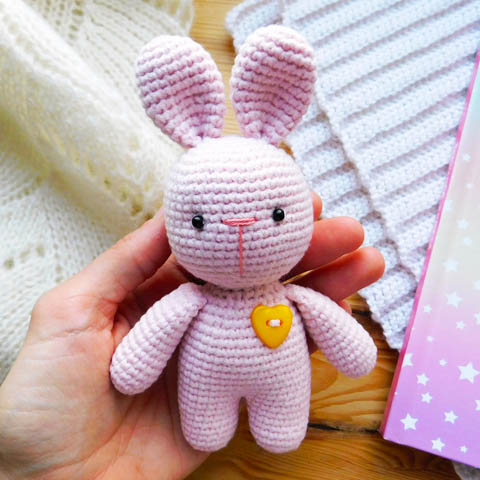