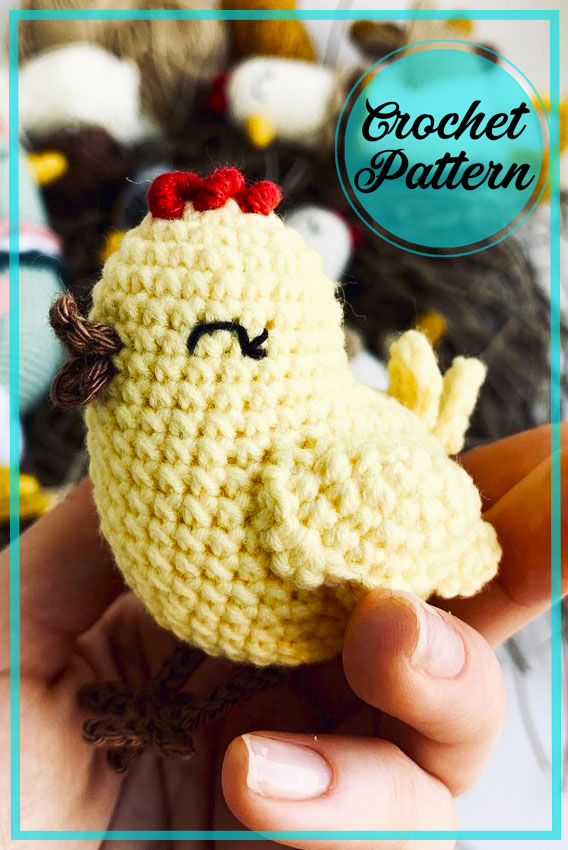 Dear needlewomen!
It’s a pretty cute chick pattern. It’s nice that the color is vibrant and the details are not obvious. The pattern is very easy and has a detailed explanation. I hope you love this chick.

Designer: momigurum_i
You will need:

– Yarn Alize Cotton Gold Hobby yellow (code 187) basic.
– Yarn Alize Bahar brown (code 179) for the beak of inozes;
– YarnArt Jeans yarn of cherry color (code 66) for a comb;
– Eyes on a secure fastening or a little black yarn (threadmuline) for embroidery;
– Your favorite hook 2.0mm;
– Knitting needle for sewing on details and face embroidery;
– Any filler to your taste (I use holofiber or synthetic fluff, which is available);
– Marker for marking stitches
(desirable!), if it is not, it is not scary, you can mark the end of the row with a thread of a contrasting color;
– Scissors;
– Inspiration and a couple of cups of hot coffee, tea or cocoa navash =)

Abbreviations
AR – Amigurumi Magic ring
MR – Amigurumi Magic ring
App – application
ll – lift loop
sc : Single Crochet
inc : Increase
dec : Decrease
tr : Triple Crochet/ Treble Crochet
st: Stitch
dc : Double Crochet
hdc: Half Double Crochet
sl-st : Slip Stitch
ch : Chain
..in : make increase into same stitch as many as the number which is given in front of “inc” abbreviation (exp; 3inc, 4inc..).
FLO : Crochet into front loops only
BLO : Crochet into back loops only
BL : Bobble Stitch – do 5dc all in the same stitch and then yarn over and pull through all the loops on your hook (the original loop + 1 loop for each partially completed dc).

The head is ready , but we do not cut the thread, from this place we will continue to knit the body of our Chicken.

Fill the part tightly with filler, then cut the thread, pull off the hole with it, secure and hide it inside the product. 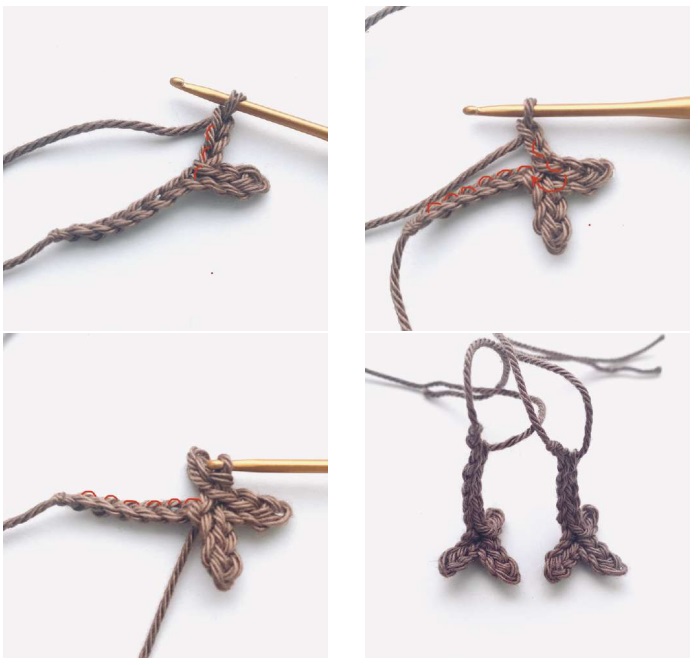 Now knit 6slst along the chain you typed in kb at the beginning .
The leg needs to be spread a little with your fingers, giving it the necessary shape – the leg is ready.
We knit the second leg in the same way =) 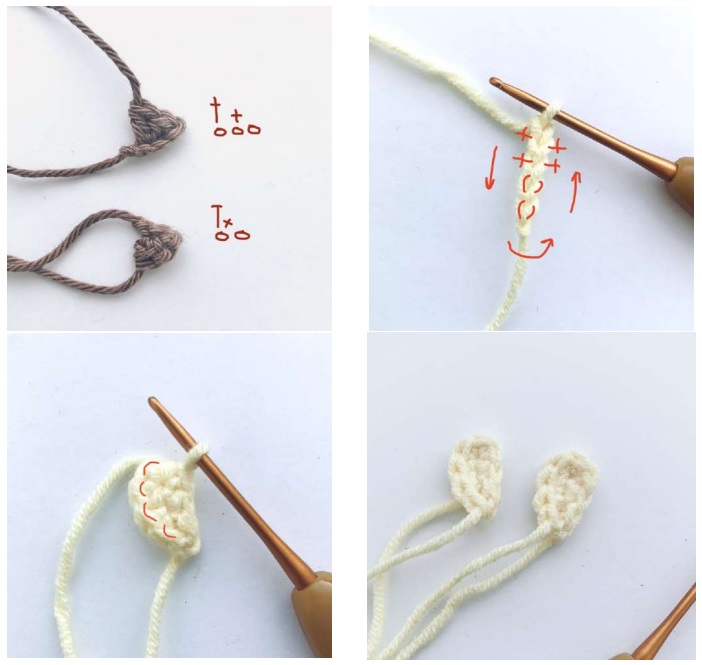 The chick’s beak consists of two parts, which are knitted and sewn separately.
Top: Cast on a 3ch chain, knit 1 sc behind the second half loop from the hook, then 1dc on the next. Cut the thread, leaving a small tail for sewing to the head.
Bottom: cast on a chain of 2ch, in the first loop knit 1 sc, 1 hdc.

Tail
The tail consists of two feathers, which are knitted according to the scheme: 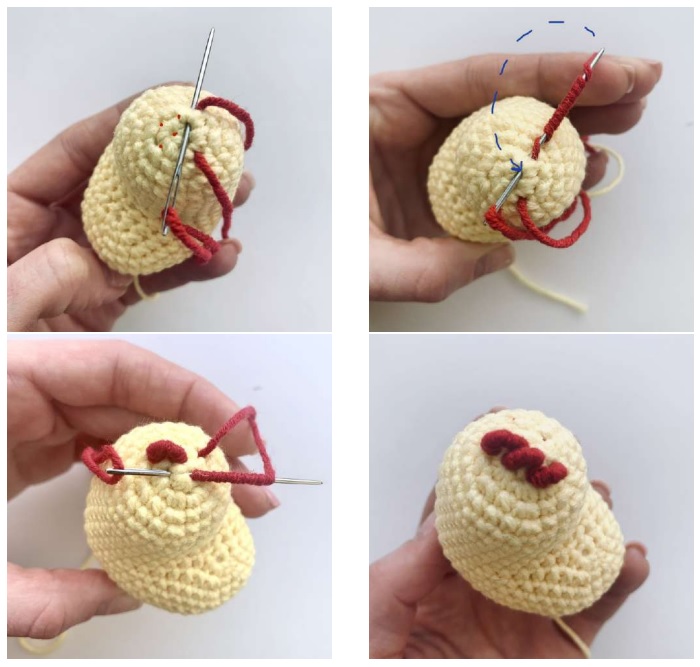 In order to make a comb, we need a needle and a piece of cherry (or other red) yarn.
We will embroider it like a French knot, the comb will consist of 3 elements.
First, outline the location of your parts . Insert the needle as shown in photo 1 and wrap it with yarn 10 times . Then carefully pull the needle through the wound loops and insert it into the place where the needle end in photo 2 is.
Do the same for the remaining 2 pieces of the comb. 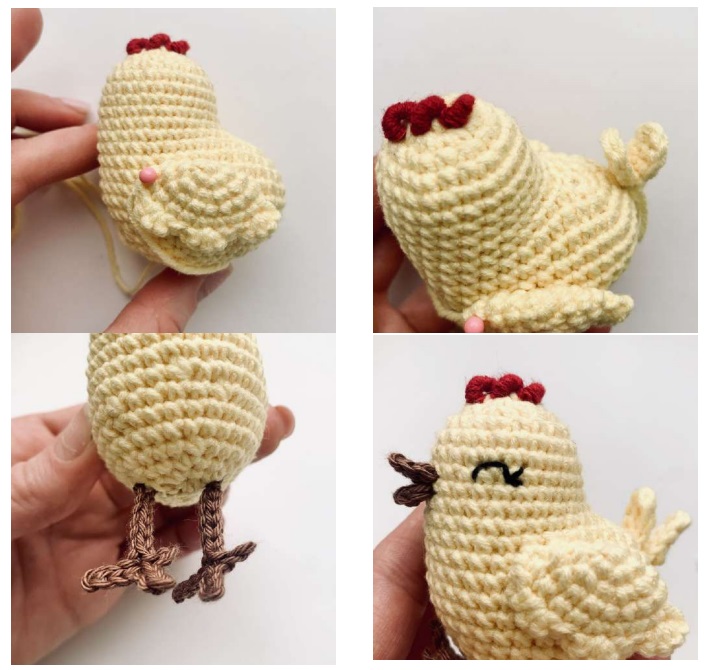 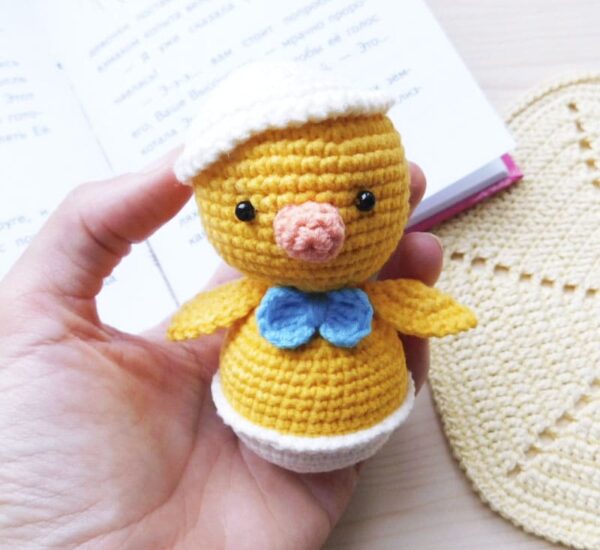 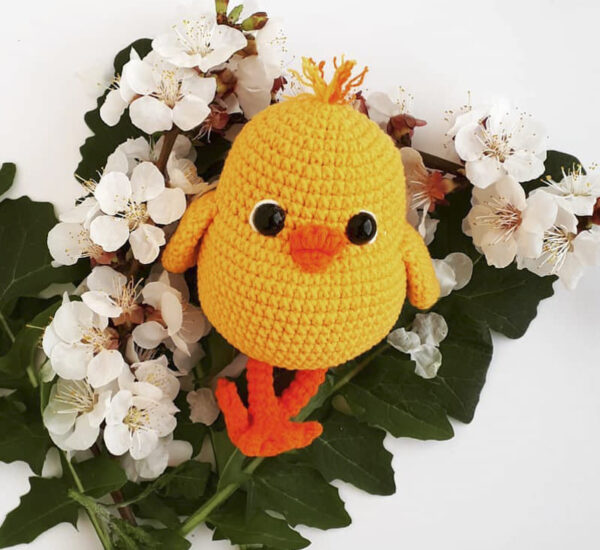 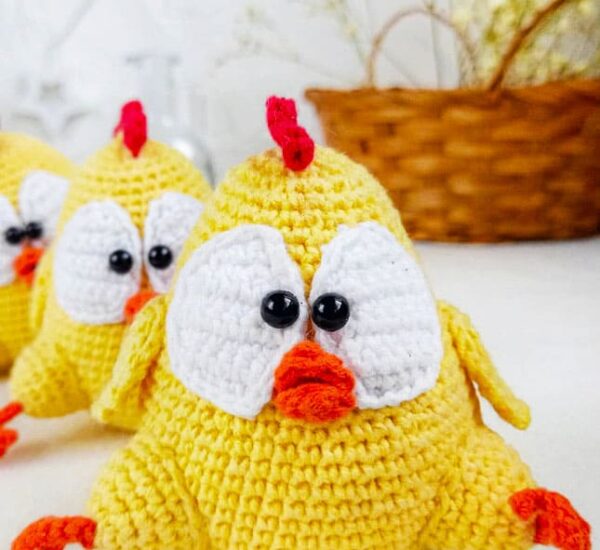