Want to make small decorative bunny amigurumi for Christmas? Today I would like to share a very small and cute bunny pattern. Bunny also has a very nice headband. The crochet bunny has tiny ears and a very cute nose. The amigurumi pattern has a very detailed explanation and I think you can do it easily. You can download the PDF pattern and get started right away.

BANDAGE
(Snow)
Ch 60, Start in the 3rd from the hook 58 Hdc. Fasten off, leaving long tail for sewing.

ASSEMBLY
1. Using 2 strands of Black yarn and tapestry needle, embroider the eyebrows 2 rounds up the eyes with 8 sts apart.
Continue to sew the nose at round 11, centered between the eyes. Make a vertical line about 2 sts long below the center of the nose.
2. Using 2 strands of Pink Pastel yarn, embroider the blush about 2 sts long besides the eyes between round 11 and 12.
3. Sew ears on the top of the head on round 3 and 4.
4. Sew arms on the sides of the body between round 13 and 14. Slightly slant the arms upward.
5. Place one edge of the bandage behind the left arm and wrap it around the ears.
Forming letter X on the front center of the head. Place the other end behind the right arm. Sew-in-place. 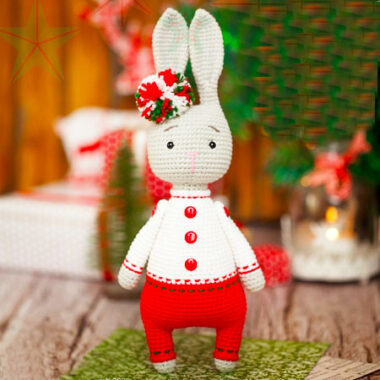